The Science of Who We Are and How We Relate
Editors: Judith Hall, Leah Dickens, Colleen Sinclair
May 20, 2019

Can Learning that a Person is Gay Change Your Conception of their Racial Features?

When we meet someone for the first time, we notice a lot about them: we notice their gender, their race, how old they are, and often much more. And in general, what we notice about a person can be consequential. For example, learning that a person is Black rather than White, or a man rather than a woman, can influence our perceptions of that person’s competence.

Psychologists have recently pushed this topic even further, asking how perceptions of a person might depend on multiple aspects of who they are, for example, on their race and their gender. In some recent research, Galen Bodenhausen and I asked a question of similar flavor: Do the racial stereotypes we apply to a person depend on that person’s sexual orientation? According to our results, the answer is “yes.”

The people who participated in these experiments had pretty strong stereotypes in their heads. White men, according to their responses, were arrogant and nationalistic. Black men, also according to their responses, were athletic and aggressive. Asian men were quiet and hardworking, and Hispanic men were religious and uneducated. But here’s the thing: the participants who listed these stereotypes were very likely thinking of heterosexual men. 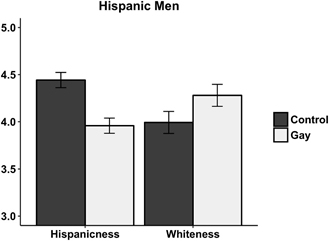 We think that de-racialization occurs because, by default, people tend to assume that the most typical member of a racial group is a heterosexual man. Thus, if you give people information that a man is not heterosexual, he deviates from this assumption—and in turn he seems less typical of the group to which he belongs.

In our article, we suggest that stereotypic Whitening—or the tendency to think of some men as “Whiter” when they’re described as gay—is driven, at least partly, by the fact that people stereotype gay men as privileged.

Despite the fact that gay men are actually more likely to face housing and food insecurity than their non-gay counterparts, our participants robustly characterized gay men as possessing upper-class attributes (for example, as being materialistic and sophisticated). Although we aren’t sure exactly where this stereotype comes from, a strong contender is the media, which often depicts gay men as privileged cosmopolitans who enjoy shopping and home makeovers (consider the gay men on Queer Eye, for example).

A consequence of this stereotype is that when men from under-resourced groups are described as gay (vs. not), they seem more affluent than they would have seemed otherwise. And because affluence, at least in the United States, is associated with being White, people in turn stereotype these men as “Whiter.”

At this point, it’s too early to tell what implications these stereotypes have for discriminatory behavior. But it’s possible that racial biases manifest differently toward gay men than they do toward heterosexual men. This and other research questions—like whether these distortions also apply to sexual-minority women—are at the forefront of where we plan to take this research next.

Christopher D. Petsko is a doctoral candidate in social psychology at Northwestern University. He studies how stereotypes influence our perceptions of each other.

Galen V. Bodenhausen is the Lawyer Taylor Professor of Psychology and a Professor of Marketing at Northwestern University. He studies the fundamental mental processes underlying social attitudes, impressions, judgments, and decisions.

Why is this blog called Character & Context?

Everything that people think, feel, and do is affected by some combination of their personal characteristics and features of the social context they are in at the time. Character & Context explores the latest insights about human behavior from research in personality and social psychology, the scientific field that studies the causes of everyday behaviors.

Get Email Updates from the Blog

What Motivates White People to Actively Support Black Lives Matter
Bottle or Breast? Shame or Guilt, Either Way
What Happens When Introverts Act Like Extraverts? In a Word, Leadership
Positive Beliefs About Being Black Can Protect Against the Harm of a Negative Racial Climate at School
Teaching Emotional Resilience Across 87 Countries During the COVID-19 Pandemic

© 2021. Society for Personality and Social Psychology®. All rights reserved.